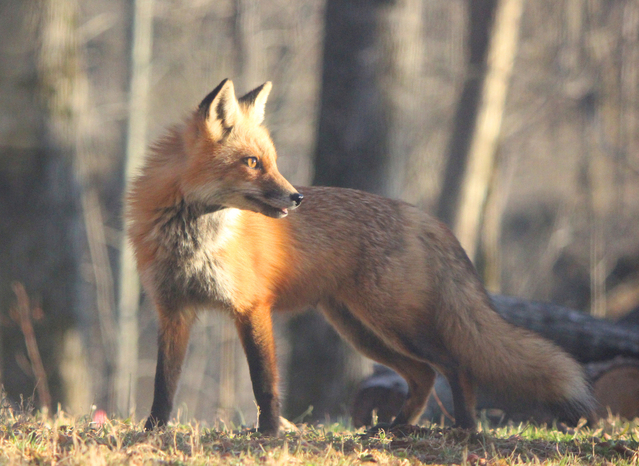 We had a little fox living in our area. I first saw him walking across the trunk of a fallen tree last week. A couple of evenings ago, my husband spotted it out in the yard at dusk. Although it was too dark to get a picture, what was great was that it didn’t run when both of us stepped out on our deck.

We normally throw out old food in the yard, knowing that one of the critters that roam around outside will appreciate it. The night we spotted the fox, we had pancakes for dinner. We had some extra batter left over, so we cooked the extra batter to throw out in the yard.

The fox was pretty friendly. When we walked out on the deck he didn’t run, but just sat still watching us. I was sure he would run when we threw the pancakes out at him, and that he did, only not as we thought. The fox actually went running after the pancakes that we were throwing his way. We made sure we didn’t throw them directly at him to scare him off, but just in his general direction. He’d eat one, then we’d throw another out, and he was hopping and jumping and it was awesome watching him. We finally ran out, but knowing there’s food around he’s still been hanging around.

By watching him I was so fascinated, I decided to look up some interesting fox facts to see what I could about the foxes in this area.

Foxes belong to the Canid family. They are nocturnal animals that usually hunt at night. They sometimes will hunt in the daytime if they reside in a particular area where they feel safe. Foxes have great eyesight and they can see as well as a cat. They actually have vertically slit pupils like a cat versus the normal round pupils that dogs have. Another thing that they have in common with cats are that they can retract their claws. They are very fast creatures and they can run up to 45 mph.

Foxes are also very playful creatures. They will play fight with each other, play tug-of-war, and chase each other around. They love balls, and have been known to steal balls from backyards and even golf courses.

Foxes only breed once a year with their mating season being between December and March. The gestation period is approximately 53 days, and there are normally two to seven pups in an average litter. Baby pups are born blind and they open their eyes when they are about nine days old. During that time, the female stays in the den with them while the male brings them food. Foxes are great parents. Male foxes help raise their offspring, and the pups live with their parents until they’re around seven months old.

The fox hanging around our house right now is a red fox. We’ve had gray foxes around here before as well.  Color alone does not distinguish one from another. Although most red foxes are red, then can also be gray or black. Gray foxes can be gray, red, or brown. There are some distinctions between the two though that set them apart.

One unique thing about the gray fox is that they are skilled tree climbers. They will climb trees not only to escape predators, but they also climb trees to sleep on a high branch in the sun, or to take a nap in the crotch of a tree.

Foxes live throughout the world in many different habitats including forests, grasslands, mountains, and deserts. They also adapt well to human environments such as farms, suburban areas, and even large communities.

Foxes homes are called a den, but normally only a female fox will live in the den when giving birth, or raising her cubs. Female foxes will dig their own dens when necessary, but they prefer to seek out dens that have already been created by other animals. Most foxes will curl up in a ball out in the open to sleep. In the winter, they use their tails to cover themselves up to retain heat.

They are solidary hunters whose diet depends on their location. In wooded areas, they normally eat rodents, rabbits, and birds. They will eat fruits and vegetables as well, and when living in urban areas, they will dine on garbage and pet food. They like pancakes as well.

The Lifespan of a Fox

Foxes average lifespan is about two to three years. In the wild, foxes are subject to various diseases and parasites, as well as becoming prey for larger predators. If kept in captivity, a fox’s life is comparable to that of a dog, and they can live on average anywhere from 14-20 years if kept healthy.

Foxes adapt very well to their environment, and they normally don’t experience stress when captured. A well-run zoo will give the fox plenty of room to roam, as well as provide it with living small game for it to track and then eat, to keep their hunting instinct intact.

Although foxes adapt well to their environment, it is not advisable to keep them as pets. Foxes are wild animals, and are difficult to tame. Although they are rarely aggressive to humans, they can bite if feeling distressed about coming in contact with people. There are places that sell foxes as pets, but I do not recommend them, as they should instead be a natural part of our environment.

Foxes appear in the folklore of many cultures, but especially European and East Asian, where foxes are thought of as figures of cunning, trickery, or possessed with magic powers. The Celtics believe that the fox is a guide, and they honor it for its wisdom.

Native American lore deals with two interpretations of foxes. The Northern tribes observes the fox as a wise and noble messenger, while the Plains tribes views the fox as a trickster playing pranks, or luring one to demise.

Superstition says that a single fox crossing your path is considered good luck, but a group of foxes are considered a sign of great misfortune.

There are many myths and stories about foxes. I found an interesting sight here with several stories from different cultures: http://www.coyotes.org/kitsune/myths.html

Through cartoons and children’s fables, I grew up hearing the phrase, “sly as a fox”. Foxes were considered evil and cunning. What I learned as a child though wasn’t correct at all. I like having the foxes around. They control the rodent population, and whenever I do get to observe them, they’re very entertaining to watch. They are actually very intelligent animals, and I am blessed that I live in an area where I can observe them.

I hope you’ve enjoyed these interesting fox facts and myths, and I’d love to hear if you’ve ever had any positive experiences with them!