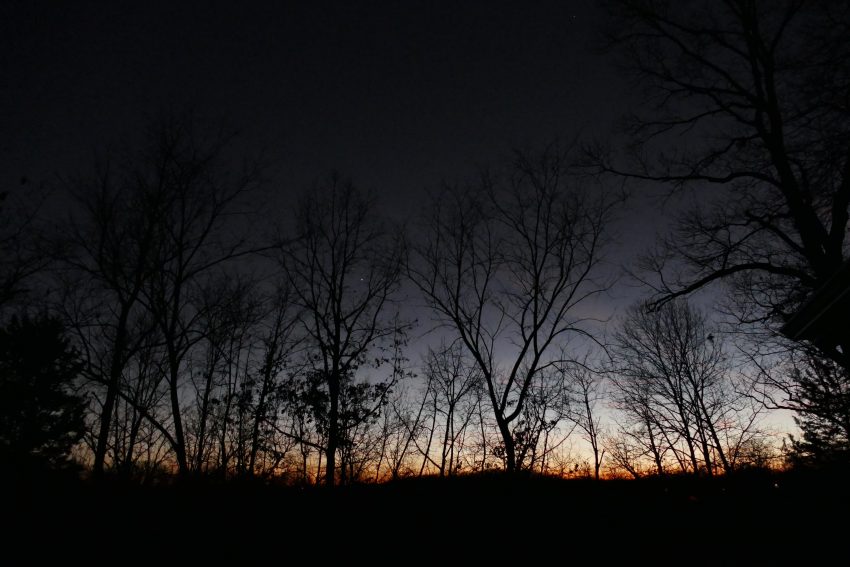 If you live in an area where you can look up and see the stars, you are very blessed. I am truly blessed as I have a small piece of earth with nature all around me. I love all that I can see from my deck.

Over the last several nights, I’ve noticed two very bright stars in the sky. Last night as the sun was setting, and the night was closing in, I had a chance to capture a picture of these two bright stars, which are actually the planets, Jupiter and Saturn. In the picture above, they are the only two stars you can see, and they are between the tree branches left of center.

Jupiter and Saturn are moving closer every night, in what astronomers call conjunction, that describes the meeting of planets and other objects in the sky. Astronomers use the term great conjunction to describe meetings of the two biggest planets in our solar system, which are Jupiter and Saturn.

The next great conjunction of Jupiter and Saturn will be December 21st, 2020, which is also the day of the winter solstice. On this date, these two planets will be only 0.1 degree apart.

How to View the Great Conjunction

Find an area where you can see the stars is the first step in viewing the great conjunction. Look in the southwest sky as the sun is setting. The brightest star that you see is Jupiter, the star above and to the left is Saturn.

Every night these two planets are moving closer together, until December 21st, when they will be at their closest. If you have binoculars, or a telescope, you’ll be able to get an even better look. Depending on how good a telescope you have, you may even be able to see the rings of Saturn.

Some people believe that when these two planets merge so close together, that it will look like an elongated star. For this reason, this event has been called the “Christmas Star”, as some astronomers believe that the Star of Bethlehem could have been one of these rare great conjunctions.

This is a once-in-a-lifetime event, so if you have a chance to see it, I would highly recommend it. I’ll be watching nightly as the planets continue their journey to conjunction.

I hope that we do see an elongated Christmas Star. With everything that’s gone on this year, we need a spectacular brightness in our world.

I can’t think of a better time than now, nor a better way to display that hope. May God bless us all.